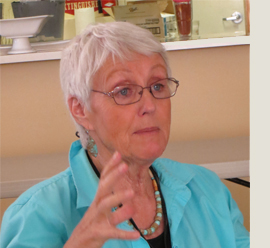 I have lived in the Morongo Basin since 2002; all of that time in sparsely populated Desert Heights, east of Copper Mountain. Desert Heights is in San Bernardino County but included in the City of Twentynine Palms sphere of influence. This allows me to participate in the business of both governments.  Desert Heights is typical of desert communities – former 5 acre homesteads frequently adjacent to small parcels of BLM land that didn’t get snatched up back when.

What do I like about where I live? I like the quiet, the clean air, the big sky and the vast views, especially toward the Sheephole and Piñon Mountains to the east. Every night at dusk when the sky is clear I can watch the bluish shadow of the earth slowly rising beneath the pink antitwilight arch. I also like the coyotes, kit fox, small mammals, cottontails and jack rabbits, snakes and lizards, the rare desert tortoise, wintering and migrating birds, flowering annuals, shrubs, and trees, and the ground they grow on and burrow into.

One reason I moved to Twentynine Palms was to get involved to better purpose than in the city. I became more informed on how to do this during my year as chair of the General Plan Advisory Committee. For the past 15 years I have been privileged to chair the City’s Public Arts Advisory Committee. I was the Desert Heights representative to the Morongo Basin Municipal Advisory Committee for about 8 years.

I am passionate about issues that support or threaten the functioning of desert ecosystems. I was a founding member and initial staff for the Mojave Desert Land Trust. For three plus years I worked with the Open Space Group to define the Morongo Basin Conservation Values and Priorities, which produced a report and a mapping tool. Much of my time now relates to fighting industrial and commercial scale solar developments while promoting point of use solar power generation. Also commanding my time is the Illegal use of recreational vehicles as well as desert wide plans to legitimize their use in environmentally sensitive areas and to the detriment of community neighborhoods. I am passionate about learning and sharing the desert stories connecting the animals, plants, people and communities that inhabit the desert landscape.

MBCA has a big voice that commands respect and can get things done. Meetings are a good for learning and sharing; they bring multiple voices and bodies of experience together. We put on good useful programs; i.e. Desert Wise Living Series.