The First 25 Years of MBCA

A History of MBCA

The Morongo Basin Conservation Association evolved from the small Morongo Basin Scenic Committee, formed in 1969 when Susan Moore noticed black and yellow helicopters flying over her yard. Shortly thereafter, Edison called and wanted to survey her property to establish the corners. Other residents who were called were not concerned, thinking it was about local lines or routine maintenance, but Susan was suspicious, and asked for an explanation. An Edison representative came to the house and showed her where transmission lines were proposed to go on the back of her property, just along a boundary of the Joshua Tree National Monument (Park now).

The route shown to Susan was only a segment of the entire route stretching from Bullhead City’s power plant, burning coal from a slurry pipe line, to the Devers Substation near Highway 10. It would have passed through Wonder Valley, Twentynine Palms, Joshua Tree, Yucca Mesa and Morongo Valley, coming in through the Amboy area and over Sheephole Pass. There would have been no tie-in for electricity for the Morongo Basin, as it would all have gone to the megalopolis on the other side of the mountains. It would have been a double row of giant steel towers supporting huge 500KV lines that would have opened the Basin as a transmission corridor that could be widened in future years. 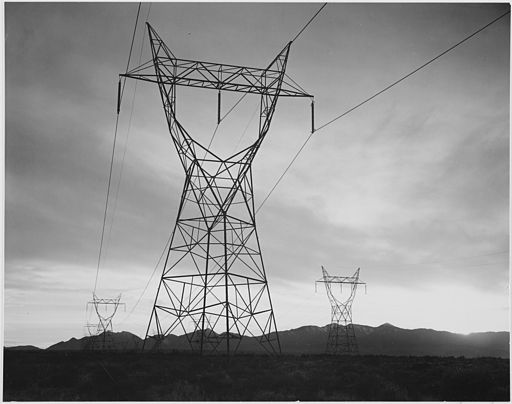 Edison was buying property rapidly along its proposed route, much of it for only $300 per acre. Susan called neighbors along the route and they gathered to resist, calling themselves the Morongo Basin Scenic Committee. As the news spread, others joined.

This group suggested moving the route to the other side of the valley, where they thought there were fewer people. However, they met with the Hi-Desert Tract Owners and found that they were a large, well-organized group in that area, so the two organizations joined to keep the transmission lines entirely out of the Morongo Basin. Their battle cry was “Take the lines south of the Monument or north of the Base, where transmission routes already exist.”

The late George Goemans of the Hi-Desert Tract owners, father of the present George Goemans, was a leader and a great organizer. He persuaded the group effort to adopt a stronger name—Morongo Basin Conservation Association—and took over leadership. Incorporation was in 1969.

Robert Frick of Wonder Valley was the first President of MBCA. He later moved to Catalina Island. The second President was Frank Cowgill of Yucca Valley.

MBCA officers took their friend Robert Purcell of Yucca Valley, who was a former actor and a fine public speaker, to negotiate with Edison. They were hoping to talk with the officials on the top floor, but were shuffled down several floors and returned very frustrated.

As Director of Publicity and Education for MBCA, Susan set up “information depots” in all of the Morongo Basin towns—various shops and offices where people could pick up the latest news of the transmission battle and petitions to sign. Letters to the Editor were frequently placed in the local papers.

The California Public Utilities Commission, which has oversight of such projects, held a hearing for this controversy in Yucca Valley, and many people came. However, the Commission said they could do no more for them unless they hired a lawyer. MBCA did not have money for a lawyer then, and so turned to the Bureau of Land Management for help, since much of the land that the line would have crossed was under the Bureau’s administration.

Jack Wilson, manager of the BLM office in Riverside, set up a railroad car with maps on its walls to study the proposed line through the Morongo Basin and one through northern Arizona. Various experts placed their overlay maps on the wall maps showing the effects of the lines on the environment: flora and fauna, geology, population trends, power needs, etc. The BLM compiled a large report entitled “The Effect of Power Transmission Lines on the Southwest;” from these studies it favored running the lines around south of the Joshua Tree National Monument rather than through the Morongo Basin.

A BLM hearing on the report was held in the Twentynine Palms High School gymnasium, thanks to Jack Wilson for insisting that it be held in the area concerned. It was a big day in Twentynine Palms, with the Weed Show, Chili Cook Off, art shows etc., yet nearly twelve hundred people made it a priority to appear at the hearing, with many of them speaking with MBCA against the lines running through the Morongo Basin. The small group of utility officials was far outnumbered. It was a great day for MBCA!

After that, Edison eased up on its pressure for the lines, but brought it to bear again later before the California Energy Commission, which had been formed during the time of this controversy. MBCA had been raising funds through increased memberships, with 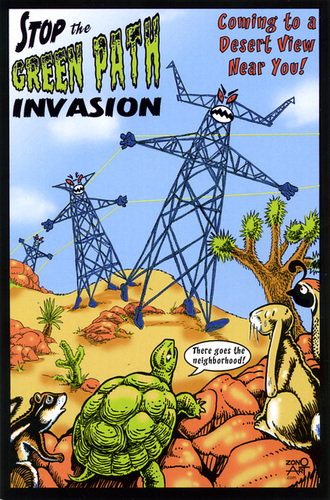 as many as 250-260 members at one point in the proceedings. With these funds, MBCA hired a lawyer, Stanford Shaw of Newberry Springs, who was very helpful with the hearings in Sacramento before the Energy Commission. Susan Moore was the official Intervener for MBCA, and received assistance from the Public Advisor of the Commission.

In 1980, the MBCA, working in partnership with the Hi-Desert Tract Owners, and speaking for the people of the Morongo Basin, convinced the Energy Commission that the transmission lines should not be taken through the Morongo Basin, but should go south around the Joshua Tree National Monument on an existing power corridor north of Palm Springs.

People from all over the Morongo Basin united to bring about this important decision. Differences between towns were laid aside while they all worked hard together with a wonderful feeling of united effort. Petitions were circulated, information was spread far and wide, and meetings were held with speakers from MBCA and community leaders. Many wonderful people deserve a great deal of praise and gratitude for their hard work over the eleven years that it took to bring about this favorable decision.

After the Energy Commission decision, the MBCA wrote to the BLM asking that it keep power lines along existing routes, and not allow them to create spider webs across the desert. MBCA was active in the review process for the California Desert Conservation Act. Later, when the BLM California Desert Conservation Act plan was shown to the public it included designated transmission corridors that can be widened from two to five miles with the addition of new lines. This proved the great importance of the Energy Commission decision to the future of the Morongo Basin. Without it, this beautiful valley probably would have become a transmission corridor. MBCA warns that eternal vigilance is needed to see that it never becomes one.

Not long after the Edison power line dispute, the Los Angeles Department of Water and Power named the Morongo Basin as one of three possible alternative routes for a trans­mission line. Led by MBCA, the people opposed this alternative, and it was dropped.

In 1973 the idea of two recreational lakes being created at the dry lake bed near Copper Mountain was pushed by developers. The Marine Corps excavated basins for the lakes. One night when water was being pumped into the lake beds, the ground collapsed and the water emptied down into it. Local realtors and developers of prospective lakeside homes wanted the lakes rebuilt. County Supervisor James Mayfield sent Vernita McDonald to investigate and Susan Moore accompanied her to investigate for MBCA. Fissures were found across the dry lake bed, and a local resident showed a hole where a natural lake had gone down before. Supervisor Mayfield turned down any rebuilding and sent the money that had been earmarked for the project to Covington Park in Morongo Valley instead.

In the period of about 1978-1983, MBCA was involved in another controversy with the Edison Company which proposed to site a fossil-fuel burning combined-cycle power plant in the Johnson Valley area. Prevailing northwest winds from that area could have brought the plant’s pollution directly down to the Morongo Basin. This project was progressing toward approval until the energy crunch brought reduced electricity demand growth due to rising fuel prices. Due to this, the Energy Commission decided that the plant was not needed. However, it gave Edison permission to build a non-polluting solar plant at the site, which has never been built.

At one time, MBCA opposed the use of Cadiz as one of several alternative site choices for a coal burning power plant proposed by the Edison Company. The objection was that it would pollute the air of a large section of the desert, possibly as far away as Twenty-nine Palms or the whole Morongo Basin. The Energy Commission finally approved a site at Ivanpah; but as far as we know, the plant has never been built.

Running Radioactive Dumps Out of the Area

At another time, U.S. Ecology was looking for a place to build a low-level radioactive dump and held a promotional meeting in Yucca Valley. MBCA spoke in opposition. David Sabol was a leader in getting them to clear out of town posthaste. The dump was later proposed to be sited in Ward Valley. MBCA also opposed it being there.

A family was harvesting yucca plants in Ivanpah Valley, pulling them up by the roots with chains, using vehicles with huge tractor treads and devastating large areas. Marvin Delano of Wonder Valley and Susan Moore for MBCA accompanied County Planning Commissioner Chuck Bell to investigate this activity and report back to the County. The result was that the County made a rule that rubber-tired vehicles must be used and that the yuccas were to be sawed off above grou 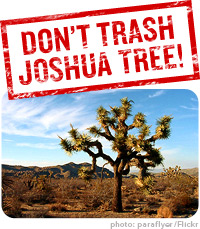 nd and not pulled up by the roots because new plants usually sprout up from the roots of the old ones. Apparently this made yucca harvesting not profitable, and the process stopped in San Bernardino County. Yuccas had been used to make foam on root beer, cosmetics, cattle food, to reduce the smell in sewage treatment plant lakes, etc.

MBCA was active in opposing the Bolo Rail-Cycle Dump proposed to be at Cadiz, the nuclear dump proposed for Ward Valley and the Eagle Mountain Dump proposed to be on a site almost encircled by the Joshua Tree National Monument (now a Park). These projects would all have bad environmental effects wherever they might be located. The Bolo and Ward Valley projects have been defeated; and the Eagle Mountain Dump has received a negative court decision in lengthy litigation, but still may be appealed by the proponents.

MBCA strongly opposed an asphalt plant proposed for Twentynine Palms. It was turned down three times, but approved on the fourth try by the City Council, over the denial by the Planning Commission. Thus it became the first polluting industry to be established in Twentynine Palms, a city that was founded back in the 1920’s by Dr. James B. Luckie of Pasadena for rehabilitating World War I veterans with respiratory diseases, due to its clean, dry air.