The End of the Altamira Project 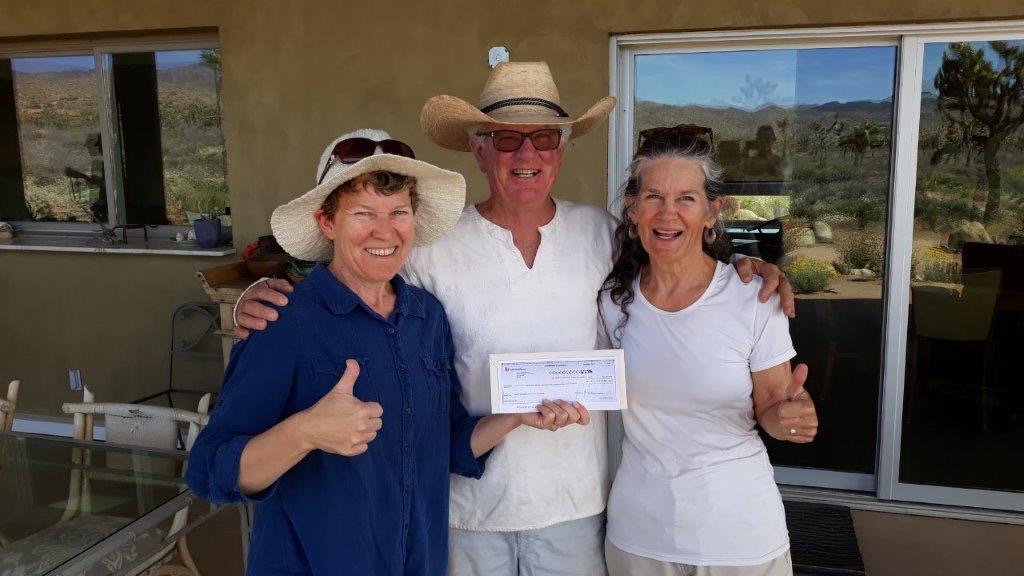 Janet Johnston gives a donation check of $193 to MBCA President Steve Bardwell and Immediate Past President Sarah Kennington on behalf of the JT105 Alliance. It represents the final remainder of community donations toward litigation on the Altamira housing project. MBCA provided updates on the project to our thousand-plus subscribers beginning in early 2015. The fight against the Altamira housing project and the final result are described in this communication from Janet, community activist and MBCA member.

After 10 years of fighting, the community of Joshua Tree has prevailed against the threat of the Altamira Gated Community. The Board of Supervisors voted on April 16, 2019, to rescind all approvals for the project. The developers, YV105 LLC, still own the property. If they decide to pursue another development, they would have to start the design, environmental studies, and approval process from scratch, likewise for anyone who might purchase the property.

The development was proposed to surround Friendly Hills Elementary School. 105 acres lush with Joshua trees, creosote, cacti, yuccas, and wildlife would have been bladed. If not left as a dust field like so many failed developments, 248 homes would have been shoehorned onto 10,000 square foot lots (0.23 acre). Its maze of cul-de-sacs would have been encircled with wall and fence, keeping out wildlife and neighbors.

The San Bernardino County Planning Staff reviewed the proposed tract map, and pushed through a Mitigated Negative Declaration, rather than requiring an Environmental Impact Report, ignoring the obvious inconsistencies of the project with both the County General Plan, Development Code, and the Joshua Tree Community Plan. Over 60 well-written public comments were sent in questioning the conclusions of the Initial Study. The Morongo Basin Municipal Advisory Council (MAC) unanimously approved a resolution against the project, written by members Pat Flanagan and Richard Lutringer.

San Bernardino is a county spread over wide and far, with very diverse goals and objectives for land use. Joshua Tree also has the responsibility of considering the wildlife and human visitors that move in and out of the National Park. Residents can only vote on one Supervisor, who then appoints only one Planning Commissioner. The other Commissioners and Supervisors have no direct interest or understanding of local conditions, and cannot be held accountable for their votes, even when the project is specific to Joshua Tree. Unincorporated communities, like Joshua Tree, have only their Community Plans, which are legally adopted land use documents, to truly represent and protect the community’s interests. The County staff and elected officials are entrusted to enforce these Plans.

The community organized: within 3 days over 160 signed a petition and the “JT105 Alliance” was formed. Janet Armstrong Johnston jumped into the role of coordinator and along with Kip Duff, Gayle Austin, David Fick, Robert Rootenberg, and many others, wrote the 66 page Appeal  Randy Polumbo generously donated the $1331 fee. Frantic calls and re-writes happened up to the last possible moment. The Appeal almost got stuck in Coachella Festival traffic but was submitted successfully 45 minutes before the deadline.

After a questionable hearing on September 13, 2016, where a possible 2 to 2 vote which would have stopped the project was not allowed to proceed, the Board of Supervisors held a second hearing on September 27. The absent Supervisor, who did not witness the hours of public testimony, returned with no questions and voted for the project. The project was passed 3 to 2 (Ramos and Lovingood).

http://resources.ca.gov/ceqa/more/faq.html CEQA, or the California Environmental Quality Act, is a self-executing statute. Public agencies are entrusted with compliance with CEQA and its provisions are enforced, as necessary, by the public through litigation and the threat thereof.

The clock started ticking again, and The JT105 Alliance had 30 days to file a CEQA lawsuit. A GoFundMe account was started, and lawyer Babak Naficy was hired. 92 people contributed to the lawsuit fund. The lawsuit was successfully filed on October 28, 2016.

Then began over two years of respectful and cordial settlement discussions with the Developer’s managing partner, Ron Schwartz, trying to find a solution that the community could embrace. YV105 listed the land for sale, with the tract map included as part of the sale. The Mojave Desert Land Trust helped in discussing possible conservation easements, but in the end the Developers decided to avoid court and clean the slate, and we thank them.

The JT105 Alliance wants to thank the over 250 people that contributed time, expertise, and money over the years, with a special shout out to The Morongo Basin Conservation Association. The lawyer is all paid, and the remaining $193 in the account was donated to MBCA.

A non-native grass-like plant that does particularly well in the Morongo Basin is red yucca, or Hesperaloe  parviflora. Its grassy evergreen leaves provide interest during all seasons, with plants having a purple cast in the winter cold.  Creative Commons photo by Fritz Hochstätter As a native of the Mexican Chihuahuan Desert, red yucca can withstand our high temperatures.  The deep rose-pink blooms usually start in June and last for a long time,...
Read More

At their June 15 meeting, the four members of the California Fish and Game Commission were split on decisions relating to the status of the Western Joshua tree. Their tie votes of 2-2 applied both to a motion to list the tree as threatened and a motion to continue the decision to the August meeting, with a recommendation to develop a recovery and conservation plan. With no decision on the Joshua tree's...
Read More

MBCA President Steve Bardwell addresses Supervisors at June 14 meeting. Photo by Stacy DoolittleAt their June 14 meeting, the San Bernardino County Supervisors voted to place a 45-day moratorium on new short-term rental (STR) permits in unincorporated areas of the County via this Urgency Ordinance. During this time the County is expected to initiate studies about housing issues caused by the excessive number of STRs. The Board also voted to prohibit...
Read More

Letter: MBCA and Center for Biological Diversity Address the County on STRs

In this public comment letter to the County and to the State Department of Housing and Community Development (HCD), MBCA details the many inconsistencies between the state-required Housing Element policies and the County's open-ended Short-Term Rental Ordinance. A few of the many issues covered are housing displacement, lack of acknowledgement of community input, quantifying of housing unit objectives, and data about housing stock and housing types.
Read More

Along with 18 other non-profit organizations, MBCA signed a letter encouraging the California Fish and Game Commission to reject the flawed findings of the California Fish and Wildlife Department staff and to permanently list the Western Joshua tree as a threatened species in California.
Read More
© 2021 GitHub, Inc. Terms Privacy Security Status Docs Contact GitHub Pricing API Training Blog About